A new colour was born, and it has been elected the “most favorite in the whole world”

By Simone Tirendi
Posted 3 October 2017
In Uncategorized
A new colour was born, and it has been elected the “most favorite in the whole world”2017-10-032017-10-05https://renneritalia.com/wp-content/uploads/2017/01/logo-renner-italia.pngRenner Italiahttps://www.renneritalia.com/wp-content/uploads/2017/10/colore-preferito-al-mondo-marrs-green-immagine-fonte-staticdezeen.jpg200px200px

How does a new color come to life? You may say it is a good question, but, even if we don’t have the answer to that, we can tell you how Marrs Green was born.

The new tonality which has been officially introduced last spring in the colors palette of a famous English paper factory, G. F Smith, is the result of the initiative launched by the company itself between 2016 and 2017.

G.F Smith is a historic company founded in 1885, well known in paper industry for the quality of its products and the inspiration of its intuitions. In the United Kingdom, it is almost an institution known to the public, in particular for a line of pieces of paper, Colorplan, which is produced in 50 different shades, 25 textures and eight different grammages.

Precisely for the Colorplan line, a style icon, G.F Smith wanted to hunt for a new color that would give a further touch of uniqueness to an alrerady well-consolidated product. This is how the World’s Favorite Color competition was born, which through a dedicated site, gave the opportunity to all Internet users to express their preference. Each participant was able to indicate the most appreciated shade and to give it a name. 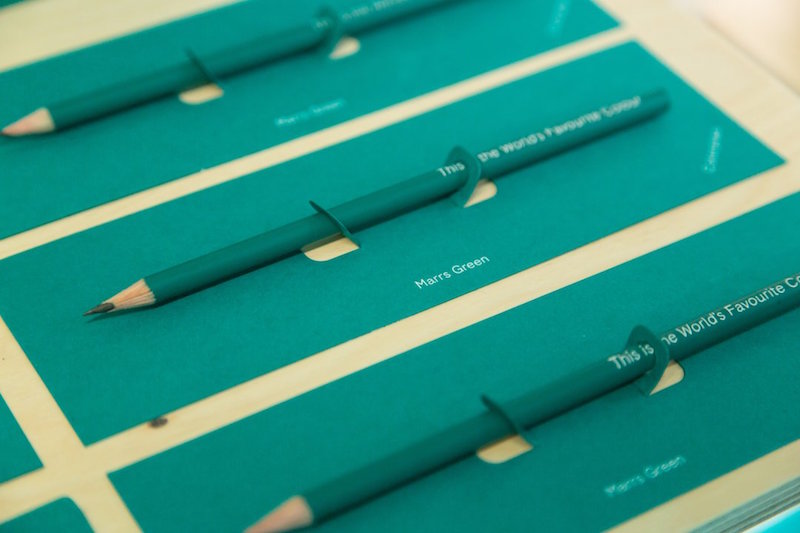 Marrs Green is the “most favorite color in the world”, an intermediate nuance between blue and green that in the fantasy of its creator, the Scottish Annie Marrs, inspires the color of landscapes and the impetuous nature of her land.

Decisive, full and intense, the new tonality, which has already come into production, is coherent with the trends that a sub institution of Franklin Til division had announced for 2017. A predominance of light shades that from green to blue sky declined in its softer variants.

And it is not a surprise that the combination of blue and green gets such a feedback, considering that other surveys in the past had shown how blue was among the most popular and beloved colours in the world. Even in the Eastern world, especially in China, which is traditionally linked to shades like yellow, red and green, considered good colors, in the YouGov survey of 2015, blue was the most popular colour.

As for the liking, the reaction of consumers who have not failed to show their enthusiasm for the new shade, crowding out the extraordinary sales at a Hull shop for some of the products specially made in Marrs Green seems positive and amused; a Tokyo Bike, the Anglepoise lamp, furniture and clothing were exceptionally put on sale before being transferred to G.F Smith’s London Space Show, about mid-July.

Certainly, the newest favorite color in the world will not be too late to blossom even around us, maybe one day we could give our name to a new colour.